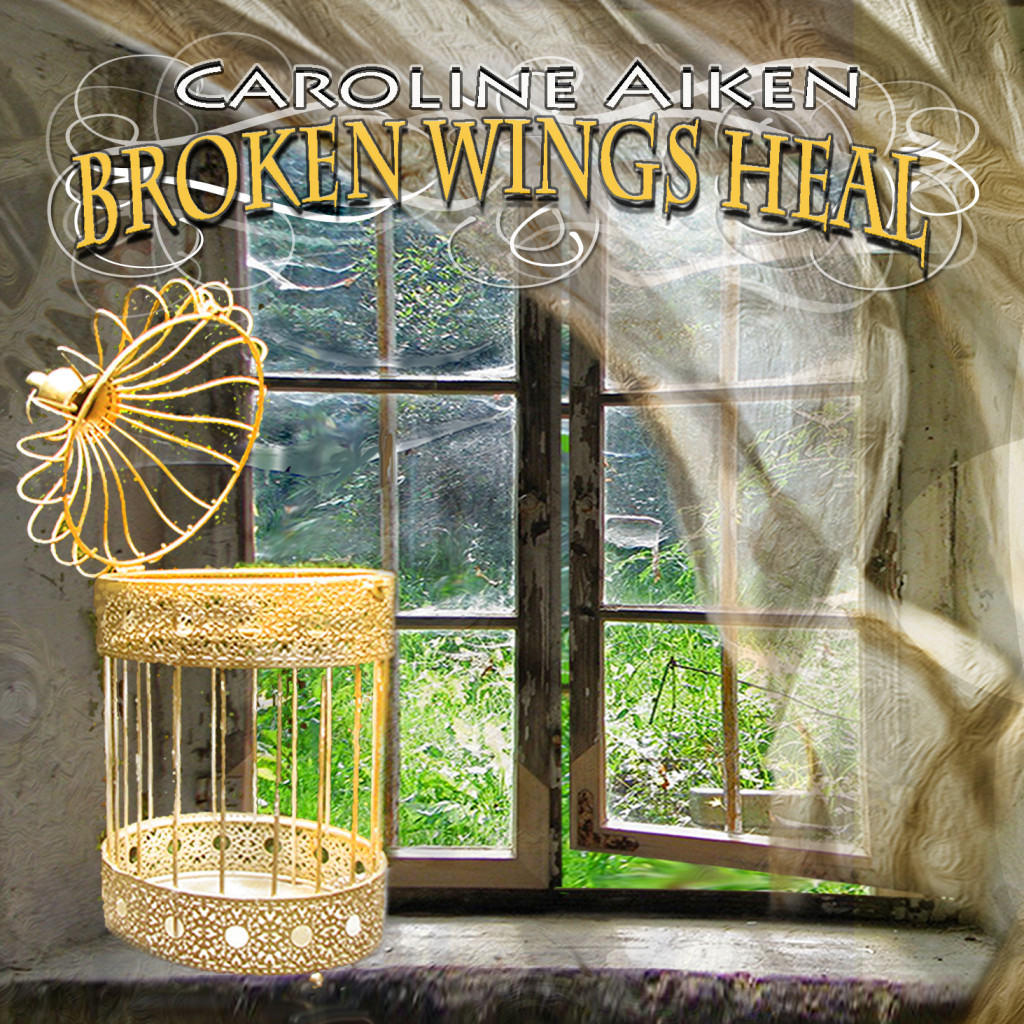 NOW AVAILABLE! FIND IT ON:

Cover Art by Michael Pierce; Special thanks to Olivia Collins.

Special Thanks to the Executive Angels: 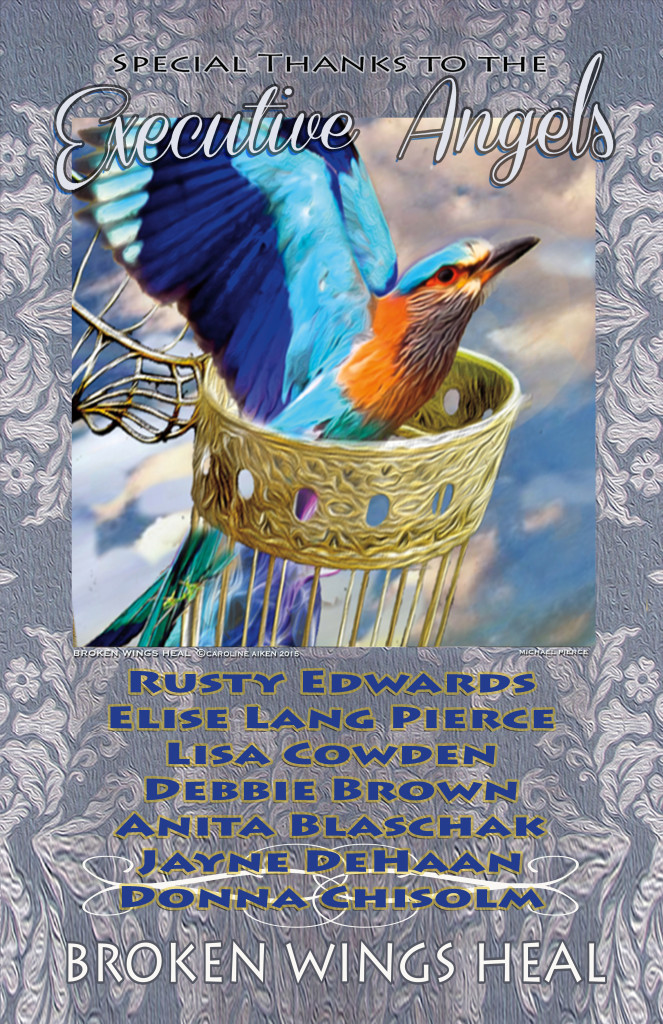 Caroline Aiken has released 8 albums in her multifarious career, but 2015 marks a first for the seasoned songbird. Broken Wings Heal, the 9th release from Caroline Aiken; has a story like no other, bearing the soul of the songwriter like the metaphor contained in the album’s artwork, a bird being released from a cage.

The inspiration for Broken Wings Heal was sparked 29 years ago, when Caroline welcomed her daughter to the world. But while attending college (4.0 full scholarship), her daughter lost direction, straying into the world of illegal drugs, was arrested. Though no one was hurt, she received a devastating ten-year prison sentence. But this story doesn’t end up a sad one, as the experience and all it has entailed bears a new beauty that shines over the lives of both mother and daughter. It brings them closer. It allows time for reflection, connection and a new direction, and when Caroline’s daughter breaks free from her cage, she will be able to soar to the highest peak, empowered to sing her own song. Broken Wings Heal, is a tribute to her daughter’s strength, love and determination. It’s a heart-on-the-table, hopeful and joyful album, and that’s just the beginning.

Engineered/Produced by Grammy nominated, John Keane (Widespread Panic, REM, Indigo Girls), Broken Wings Heal is a lush and intricate exploration of folk/rock with funk and jazz between the layers. Aiken’s own guitar and piano skills showcase her pure, bluesy vocals, complimented by John’s powerful electric guitar, pedal steel and Randall Bramblett’s horn solos. The title track was written by Boo Ray, and its message echoed Caroline’s own hopes for her daughter, and raises the spirits of all who hear it. “Razor Wire” is a bird’s eye view and positive message of visiting her daughter in prison. “Mysterious Wonder” changes everything up with sultry jazz and vivacious lyrics, originally written in a group of 40 students and staff during Aiken’s time teaching children at a music camp in North Carolina. “Cry Wolf” makes no apologies in amping up the rock ‘n roll edge factor, while “Everything Can Change” (lyrics written by Caroline’s daughter at the age of 12) and finds its place among the rest as a stripped down piano number. Start to finish, Broken Wings Heal is brimming with stories, inspiring messages, and lush, beautiful music that provokes joy, hope and honest to the bone introspection. 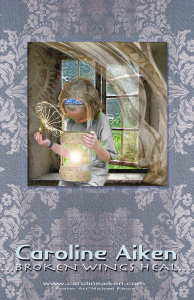 Since 1969, I have toured, promoted, booked, managed, recorded, manufactured eight CDs and performed on many other artists’ recordings. I’ve participated in many benefit recordings and performances and raised thousands of dollars for children at risk, breast cancer, safe houses, veterans, many more worthy causes. I currently play national and international festivals, college and community radio, theaters, house concerts and concert series in the USA, UK, Denmark, Sweden, Central and South America and Europe. It’s an honor to be entrusted with people’s homes and to be invited into their circle of friends and family while touring and teaching.

I began mentoring the Indigo Girls in 1980, beginning my love of helping people get to the stage with a positive experience. I give workshops called Zen and the Art of Performance, Songwriting In Your Sleep, and Guerilla Guitarsworks. I am president of the Athens Clark County chapter of non profit 501-c-3 “Guitars Not Guns and Guitars Players Against Gun Violence” (www.guitarsnotguns.org). Raising money in order to buy starter guitars for at risk kids, teaching them lessons and telling them that they get to keep their guitars at graduation is a labor of love that fills my heart with joy watching their eager faces. I also teach grownups how to be kids again on the mic, on stage, and in front of an audience. It is a great pleasure to help someone find their voice and release their message.

I was the Entertainment Director of the Atlanta Dogwood Festival in Atlanta, Ga for 12 years; ’93-’05. As a musician for so many years, I then learned what it was like to be a talent buyer. I vowed to take good care of my artists, stage hands, and volunteers. I booked Dave Mason, Derek Trucks and Susan Tedeschi, Chuck Leavell (Rolling Stones, Allman Bros, Eric Clapton), Randall Bramblett, members of B52s (Cindy Wilson), Mavis Staples, Sugarland, Jennifer Nettles, Shawn Mullins, and so many others. Each year, I managed a $150,000 budget, booked and contracted over 100 acts, built and staffed 8 stages (sound, lights, art, signage, logistics of each stage) hired 50 workers, and found in-kind sponsorships of food, hotel rooms, a million dollar tour bus for the green room. I brought in a world class promotions team, reintroduced the high school art competition, and in 2003, raised $600,000 at the stages so that the ADF could buy their office space outright, never having to pay another rent check.

Being a truly independent artist means I have full responsibility of whether something gets done or not. I knew I had to crowdfund or I wouldn’t be able to record.  Asking for money and support was awkward and scary, but I knew I must if I was going to put out this next CD with John Keane.

The title song, “Broken Wings Heal” is by Boo Ray, a Nashville songwriter who I first met in Athens, GA in 2008, and fell in love with the vernacular and spirit of this song, which cuts right to the bone, and says everything I need it to say and more. It is a beautiful centerpiece to this recording, which centers around and explores the fall and rise of a loved one.

I’m learning to appreciate every moment, every nuance of life. These songs are stirred and born from that appreciation and from the yearning to be in the moment and deal with life on life’s terms. I’m healing in front of you and I feel naked and exposed. I am creating a new path with every step.

You have reaffirmed my belief that we could all come together on a cosmic level to make a difference. You helped create a new platform that gives us a common language, a compass with which to gauge life, creating a code book in which to communicate. Your contributions have been a life line and have enabled these songs to reach out into the world. Thank you! 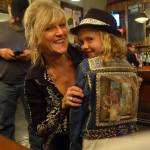 Michael Pierce is a beloved artist based in Athens GA with an international reach. I’ve known Michael and his inspired artwork since 1977 in Macon, Georgia. Michael’s art for BROKEN WINGS HEAL focuses on a beautiful golden gilded cage that I found on the side of the road while on tour in Austin Texas, April 2014. It was calling to me, waiting for me. How did it not get picked up before I got there?! With this cage, Michael has created the perfect image depicting the human desire for freedom. His vision has given this CD the beauty and grace that I see every time I look into my daughter’s gorgeous, hopeful, bright and clear eyes.

This CD is dedicated to my daughter, Sarah Page. As an honor student with the highest GPA in her class, she was on a full HOPE scholarship to Georgia State University when she became addicted to heroin. She has been incarcerated for the past seven and a half years for acting out in desperation during the withdrawals. Fortunately no one was hurt and prison saved her life, and my beautiful, smart and sensitive girl returned to me. She has not only recovered but she is thriving. She has taught over 300 women, helping them to obtain their GEDs. Presently, she works hard for her 4.0 GPA in her accredited college courses. She is singing and playing guitar in the traveling choir and participating in the dog program that rehabs pound pups and teaches inmates to be vet assistants. She has begun the Theology program with the prison’s chaplain and in 2017 she will come home. Rising out of the ashes, she flies towards the sun. Broken Wings Heal.